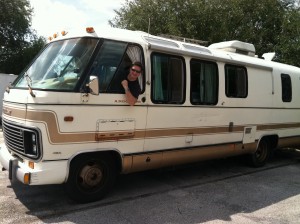 Since Brett and I had just come back from his birthday celebration and I wanted to help with this outing, I decided that I would take care of food and condiments and he would deal with the rest.  So I made a menu, sent it to Brett for his ok and I was given the go ahead.. so let the cooking begin.

I wanted lasagna.  I wanted the lasagna that I was used to.  Apparently that isn’t the same as the lasagna we all make in the US.  Penny dropped.  It was the lasagna I had when I lived in England.  With a bit of research I was able to find the recipe that I wanted.  Lists were made and shopping for lasagna ingredients and other foodstuffs for trip was completed.  While I was out shopping I kept wondering why the only lasagna I had come across in the US was the one made with ricotta, mozzarella and other cheese.  I decided that when I got home I would research this and find out what the difference was.  Was the ricotta version an Americanized version or .. what?

So I looked all this stuff up.  How else will I learn and *understand* what I am doing.

My research time told me that lasagna, like everything else in Italy, varies considerably from region to region; in much of the south you’ll find it made with tomato sauce and ricotta (a simpler American version), or tomato sauce and meatballs, but you can also find it made with fish, or made with greens and vegetables.  However in  Emilia Romagna and Tuscany,  lasagna is winter comfort food, made with Sugo alla Bolognese and béchamel sauce, and an abundant dusting of grated cheese before it goes into the oven.

Bingo!  My preference, the one I am accustomed to is the latter version.  So now I had my answer and a bit of knowledge that I didn’t have that I could include with my blogging of this meal.

Since I was happy with my research and all questions were answered I started cooking this at 6 PM in the evening.  I didn’t think I would have time the following day and I was right.  I barely had time that night.  I didn’t read the instructions very well, and part of them included simmering the sauce… for 3 hours.  Whoops.  I had to decide if this was actually what I was going to do – I was committed already,  by the time I read the simmer part I had started the béchamel as well as the bolognese sauce.  I made the correct choice – it was to simmer for 3 hours as that is what the directions said and they MUST say it for a reason.  Indeed they do – while the sauce was simmering, I did more research on why am I simmering this forever, most recipes call for a simmer time of 6 hours while adding more liquid as needed.  I figured I got off lightly and asked no more questions.  Its an adventure this cooking thing. The result answered that question.

I made the béchamel sauce and refrigerated it for the time being.  I didn’t want it sitting there for 3 hours and I can easily reheat it to make it soft again for layering.  Also while the sauce was simmering I took care of the noodles.  I used the ones that you have to boil, I realize that there is a term for that kind of noodle but I don’t think I know it right now.  So everything was prepped and ready to go while I sat here for hours smelling that simmering goodness.  Now that I told you my little idiosyncrasies with this recipe I will let you in on the ingredients.  Again, I wouldn’t be me if I didn’t modify this one as well. 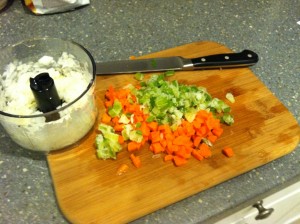 * Onion and garlic are never combined in this recipe, but Brett and I both LOVE garlic so I added 3 cloves of garlic anyway.  It turned out just fine, neither over powered the other.

** I found that ground chuck was awful greasy, next time I will use a leaner meat, but not to lean as the grease from the meat helped flavour the sauce, tremendously.

*** These were supposed to be imported from Italy plum tomatoes, I didn’t have access to them and I had a bulk supply of Del Monte diced tomatoes with basil, garlic and oregano.  They worked just fine and the addition of the spices was a welcome thing. I will go into more detail about the spices at the end.

I also added a few mushrooms, because Brett just loves them.

1 lb of lasagna noodles – although I don’t like this measurement – I didn’t use nearly half the noodles I made.  Unfortunately I didn’t count what I did use.

* Spices note: I added Italian seasoning, oregano, granulated garlic, basil, salt and pepper and a bay leaf which I removed.  To each their own taste. 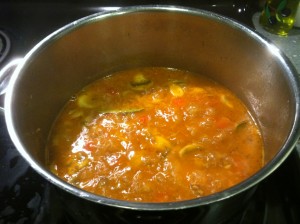 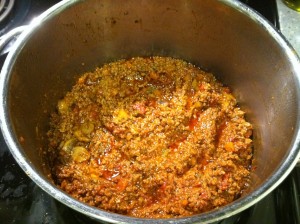 * Bechamel note:  I found that 3 cups of this were NOT enough to finish the second layer. I ended up making another cup. Adjust this as needed to do that if you feel you don’t have enough. 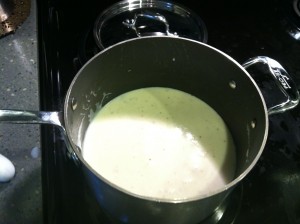 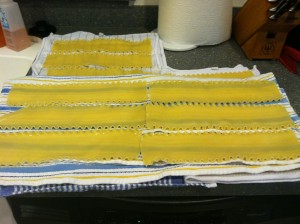 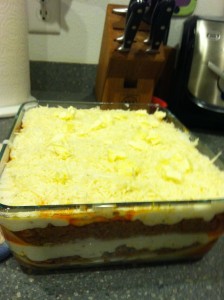 It made 2 layers using the ingredients I made. I made one more cup of bechamel sauce to finish up the top layer.

If I learned one thing on this experiment it would be that I really need to read and then re-read the directions.  Apparently it is delicious – it is a keeper.  Maybe Brett will chime in and leave his comments below.  If you have anything to add, please leave me a comment!

Out of the oven!!  Love that crispy top of freshly grated Parmesan cheese. 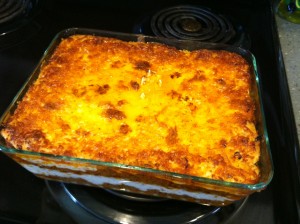 For the record, I started simmering at 8 pm, at 11 it came off the stove, by 12.30 am I finally had a clean kitchen.  I cooked it in the oven the next day.  It was worth every HOUR.

Last reply was 13 hours ago